How to safely remove a tree on your property

Thinking of buying Commercial property for rental? Here’s what to consider 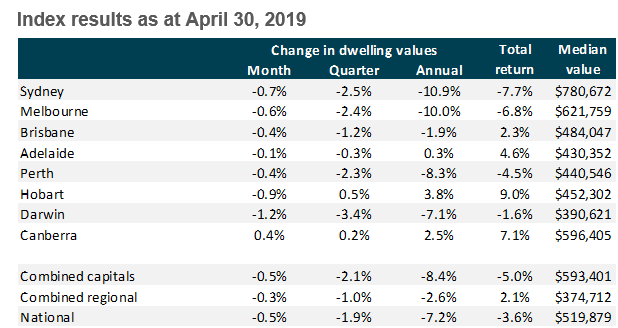 The CoreLogic April 2019 home value index results out today confirmed that the decline in home
values has lost some momentum over recent months as falling values lose steam in Sydney and
Melbourne. Simultaneously, more regions across the country saw housing values slip lower as the
downturn becomes more geographically diverse.

Dwelling values across Australia continued their downward trajectory in April, falling by half a percent over the month to be down -7.2% over the past twelve months and -7.9% lower since peaking in September 2017. Although housing values are broadly trending lower, the rate of decline has been easing since moving through a monthly low point in December last year when national dwelling values fell
-1.1%.

According to CoreLogic head of research Tim Lawless, “The improvement in the rate of decline is attributable to an easing in the market downturn across Sydney and Melbourne where values were previously falling much faster. In December last year, Sydney dwelling values were down -1.8%, with the pace of month-on-month falls progressively moderating back to
-0.7% in April. Similarly, Melbourne values were down -1.5% in
December, with the rate of decline improving to -0.6% in April.”

Other property market insights supporting a subtle improvement in housing market conditions include a rise in mortgage related valuations activity (as indicated by CoreLogic platform data), an improvement in ABS household finance data for February, and the fact that auction clearance rates are holding around the mid-50% range across the major auction markets. Tim Lawless said, “While none of these indicators could be described as strong, the current trend in the data implies that housing market conditions may have moved through the worst of the downturn.”

In April, dwelling values fell across every capital city apart from Canberra, while regional areas of Tasmania, Victoria and South Australia also avoided a fall. The broad-based nature of lower housing values highlights that while the rate of decline has eased, the geographic scope of lower dwelling values remains broad.

Values were down by -0.9% in Hobart, signaling a weakening across what has been one of the strongest capital city markets for value gains and leaving Canberra as the only capital city where dwelling values were up over the month.

Annually, national dwelling values were down -7.2%; the largest annual fall since the twelve months ending February 2009, which was associated with the Global Financial Crisis.

Now you own your data: the new world of ‘open banking’ explained

Getting a Foot in the Door: What you need to know about the new HomeBuilder grant

This template supports the sidebar's widgets. Add one or use Full Width layout.